Difference between Botox and Dysport – Which One Should You Get?

Difference between Botox and Dysport

Difference between Botox and Dysport – Which One Should You Get? Getting on in years and starting to worry about those wrinkles that have begun to appear on your face? The older you get, the more you get to hear about skin issues. Botox and Dysport are two popular injectable medicines that can fix many different skin problems.

Mostly used to treat muscle spasms in different health conditions, Botox and Dysport are also used to get rid of lines and wrinkles on your face when taken in controlled amounts. Let’s take a look at them in detail and settle the Botox vs. Dysport debate.

What Are Botox and Dysport?

Botox & Dysport contain botulinum toxin A, the ingredient that induces relaxation in your facial muscles, which is what helps get rid of the wrinkles and both the medicines are similar in their function.

Medicines hinder nerve signals in your targeted muscles, which causes them to stop contracting the way they did before. The muscles become relaxed, thus, smoothing out the skin care and removing the wrinkles.

ShineMD MedSpa offers both Botox and Dysport treatments. Their prices are dependent on many different factors, but one Botox injection can cost anywhere between $12-$15. However with membership at ShineMD Medspa you can get it for $8.99 per unit. Final cost will depend on where you’re getting the injections, how many you’re getting, and how many sessions you’re going to have.

What’s the Difference between Botox vs Dysport?

The major difference is that Botox entered the request first and approved by the FDA in 1989 and began to be used for ornamental purposes in 2002. Before that, it was substantially used to treat muscle spasms, muscle relaxers.

Botox is used in the United States. Dysport is most popular in Europe but is now used in over 60 countries worldwide and approved by the FDA in 2009 and is now also used in the junking of wrinkles or moderate to severe wrinkles.

Another big difference between the two is that Dysport is more adulterated, and more ornamental injections of it are demanded to fill certain areas. This does not mean, still, that it’s more precious than Botox. One injection of Dysport is much cheaper than an injection of Botox, but because there are more units of Dysport needed, the prices of the two products are nearly the same.

For areas like the forehead and 11 lines where there is more surface area, doctors usually recommend Dysport. Botox diffuses slowly and is thus, better for areas with a smaller treatment area, like frown lines, lip lines, droopy eyelids and Crow’s feet.

Depends on where you want to get the injections and how your doctor applies them. In most cases, doctors use both for different areas of the face. They’re both FDA-approved, so they pose no threat to your health.

Doctors believe that these two medicines are perfect for people who are between the ages 35 and 65 and people who have a lot of facial wrinkles that refuse to go away even if they’ve tried every skincare technique there is. Both medicines will only treat wrinkles around the lips, cheeks, eyes, chin, and forehead.

Mainly Doctors advise against getting either product if you’re allergic to Botulinum Type A or if you’re pregnant and have skin allergies.

The Process for Dysport and Botox

The treatment process for both medicines is pretty much the same. First, you consult your dermatologist, who examines your skin and checks your medical history. Then they decide if they want to give you both or just one. In most cases, you should expect to get both products.

The injection spots are benumbed with a topical cream before the procedure starts. The entire process takes about 30 twinkles. They are both non-invasive treatments, and Dysport injections are occasionally deeper than Botox because they are fitted into corridor of the skin that have a larger face area. The results begin to appear in a couple of days.

Once the treatment is done, you can go back to doing whatever you were doing ahead. Your doctor will most likely tell you to follow some precautions like:

Less side effects associated with the two medicines. You might see some swelling around the area, and it might even hurt a little, but these are very common. All the procedure done by a professional, so you won’t have to worry about anything. 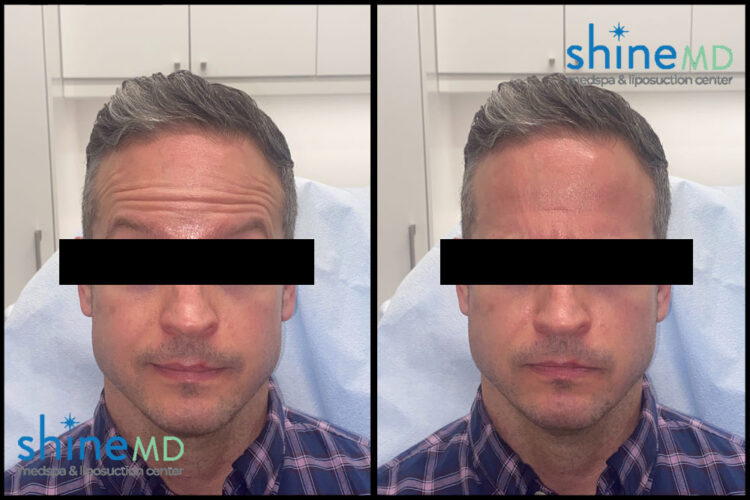 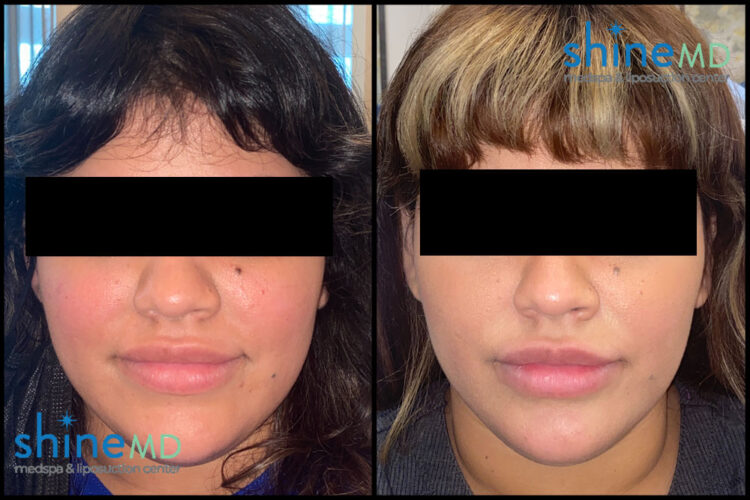 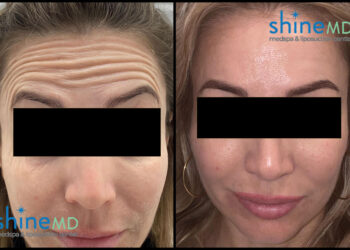 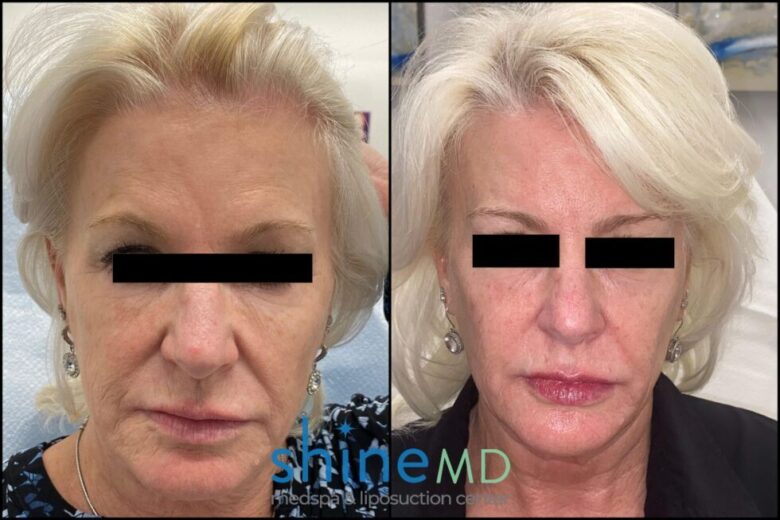 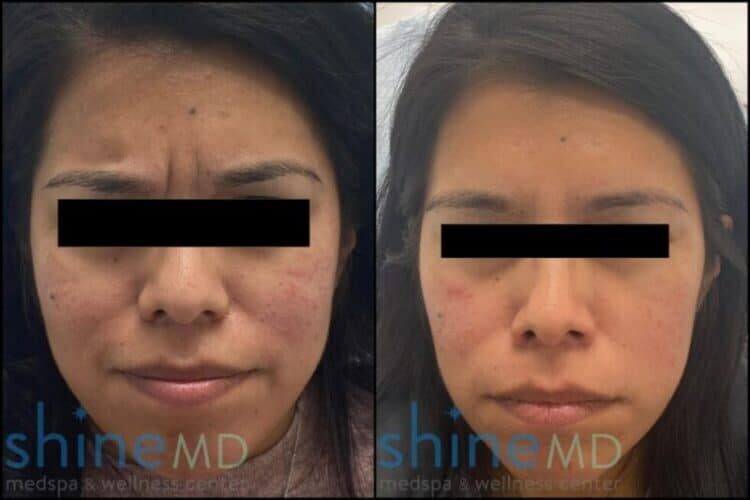 Botox vs Dysport: Which One Is More Effective?

The truth is, they’re both equally effective. The only difference is that Botox mostly lasts for about 4 months, after which you’ll have to get more injections.

Dysport lasts for 3-6 months, depending on the area where you got the injections. Botox sometimes lasts longer when applied to parts with a smaller surface area like eyes and lips.

You should have a pretty good idea of where you stand in the Botox vs Dysport debate. They both have similar functions and treatment procedures, and in most cases, you’ll have to get both of them.

The two major differences are that Botox is more popular in the United States while Dysport is more commonly used in Europe, and Dysport is used for larger surface areas, like the forehead and 11 lines.

You have to consult your doctor to know which one is best for you. The cost will depend on how many injections you’re getting, where you’re getting them, and a couple of other factors.

ShineMD Medspa & Liposuction Center has both Botox and Dysport, and the professional and certified aestheticians who work there will make sure that you get the right solution.

Here at  ShineMD Medspa & Liposuction Center in Houston, TX, we give you solutions. So, please book an appointment with us today and get a one-on-one consultation with the best board-certified physicans in town. You can call us at 832.509.5099 to schedule an appointment also.

Read ahead, and we’ll walk you through everything you need to know—one step at a time.

You may have applied various cosmetic products and lotions to treat the aging signs, like wrinkles and dark spots. However, what would you do when

What’s the difference between Dysport vs Botox?

The only thing which is not possible by humans is halting aging. The truth of the universe is that whoever takes birth has to die

Everything You Need to Know About Lip Fillers

Things You Should Know Before Arm Liposuction

What is Breast Lift With Pideal Threads?

BROADBAND LIGHT(BBL) THERAPY AND ITS SPECIFICATIONS

(*) Disclaimer: Results aren’t guaranteed, might not be permanent and can vary per individual. Some images are of models, not actual patients. The information throughout this site is not intended to be taken as medical information. The info given from ShineMD Medspa & Liposuction Center is intended to provide general information regarding breast augmentation, weight loss, liposuction,  smartlipo, vaser lipo, Brazilian butt lift, fat transfer, mommy makeover, facelift, buttocks lift non-surgical rejuvenation, botox, dermal fillers, medical spa treatments, and much more for residents of Houston, Katy, Sugar Land, humble, woodlands, memorial city, river oaks, spring, Pearland, post oak, Dallas, San Antonio, Austin and nearby regions of Texas. If you are interested in finding out more, please contact our office today for a personal consultation.